● Easy and Safe Use

● Pack Multiple Columns with One Unit

● Fully certified by the German TÜV for the highest safty level

Because it employs a pneumatic packing mechanism, the MultiPacker® instrument for 25mm and 50mm i.d. Spring® columns uses no electrical power, making it safe for use with many types of solvents and a good choice for hazardous environments. The same applies to the 50mm and 101mm model. However, it features an airdriven hydraulic mechanism.
Other typical hydraulic packing systems on the market do not feature the damping devices provided in the MultiPacker® instrument. Therefore media (especially sensitive large pore media) can suffer from pressure peaks created by the hydraulic pumps. Pressure peaks cause particle breakage, leading to high back pressures, loss of efficiency, and poor peak shape. Also, the packing speed and the packing pressure of traditional systems may not be independently controlled, as is possible with MultiPacker® systems. The MultiPacker® instrument for 25mm and 50mm Spring® columns overcomes this problem by using a pneumatic rather than hydraulic packing mechanism, combined with a hydraulic damping circuit. This combination allows a very smooth packing operation without any pressure peaks, and with the packing speed being completely independent from the chosen packing pressure.

The MultiPacker® instrument for 50mm i.d. and 101mm i.d. Spring® columns can also control the packing speed independently from the packing pressure. To help avoid pressure peaks that could harm the media, this air-driven hydraulic system features a sophisticated damping circuit which allows smooth and gentle packing of nearly all available chromatography media. Both MultiPacker® instruments are easy to use, require very little training, and are virtually maintenance-free. They are both approved by TÜV Rheinland according to the EU machinery directive, are fully CE-certified, and come with an ATEX® exclusion that states their suitability
to be safely operated in explosion-hazard areas. Preparation for column packing is simple and straightforward; the packing process itself is very simple and can typically be performed in only a few minutes. Unpacking of the hardware and the cleaning process for the parts before re-packing are also easy to do.

The MODcol® MultiPacker® instrument for 50mm and 101mm i.d. Spring® columns has same principle and performance as the 25-50mm unit. Both instruments have state of the art safety features and are designed to work in modern pharmaceutical lab and production environments. They are nearly maintenance free and easy to handle with very little training required. 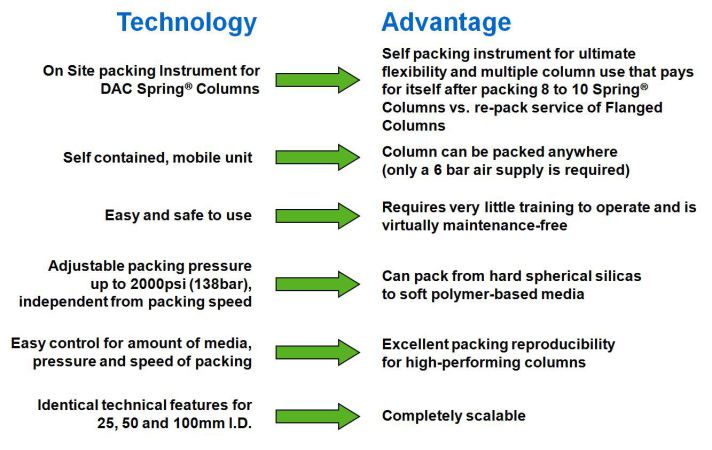 MODcol® Dynamic Axial Compression (DAC) Spring® Columns are the product of choice for chromatographers who require high performance, robustness, and long lasting columns. This highly versatile DAC technology is self-contained in a small and portable package, providing a highly advanced and flexible technology for preparative and semi-preparative chromatography columns. MODcol® Dynamic Axial Compression Spring® columns are the only mobile DAC columns on the market. They can be used without being mounted in the Multipacker® instrument with full DAC functionality. Spring® columns are available in 25mm, 50mm and 101mm i.d. and 2 lengths, which enable packed bed lengths from 5–300mm. Dynamic Axial Compression has been used for many years in process chromatography to provide long lasting columns with excellent performance. This technology was developed to address the loss of efficiency and peak symmetry that can result when many samples and large amounts of mobile phase are passed through columns with fixed low-density beds. Under these conditions the initial packing of the media particles in the column bed can be disturbed, resulting in the formation of a void at the column inlet or in a channelling through the packed bed. This compromises efficiency and peak symmetry. Such voids and channeling can be eliminated by using a DAC system that continually forces a piston against the media bed at the column inlet. Traditional DAC systems drive the piston with a hydraulic mechanism. The mechanical complexity of the hydraulic components can make it much more expensive than traditional columns. Until recently, use of DAC systems was limited to large permanent installations or expensive preparative systems where the column is an integrated part of the packing unit and can not be used independently after the packing process is finished. For the few alternative systems available for which the column can be separated from the packing unit, the DAC principle is lost when the column is separated from the packer and reduced to static axial compression (SAC) only.